In this section you will find short reviews or first impressions on different shareware programs. Simply click on the tab you are interested in and it will display the review for that particular application.

“Shareware” refers to “try before you buy” software. It is usually a commercial program that can be used freely for a certain period of time (usually between 15 and 30 days). Once the trial period is over, it has to be bought or removed from the computer. As is the case with freeware there are different types of applications under the label of “shareware.” Some are fully-functional, although there may be certain features that only become available when the full content is acquired upon registration. Demoware/trialware and crippleware do not belong in here, as the policy of Bible Software Review is to not review such programs.

Note that not all shareware programs will be reviewed here. There are some feature-rich shareware Bible software applications that will receive a more extensive coverage under the Reviews section of BSR.

Finally, do keep in mind that “shareware” refers to the program, not necessarily the contents. Although, by and large, shareware programs include Bibles and texts that are already in the public domain, this is not always the case. There may be applications that offer copyrighted texts (as add-on, payable modules), but here we are concerned with the nature of the programs.

The Workman’s Study Bible, version 1.3. Developed by Michael N. Jackson and William R. Kincaid. Free to use for 30 days. After that period, a license key will be required in order to run the program. License costs $34.95 and includes all future upgrades.

Disclaimer: The development of this program is at a standstill at the moment. This means, for example, that Windows Vista is not officially supported, and that newer features are not being implemented. This situation may change in the medium term. Having said that, the reason it is reviewed here is that it is a very good program as it stands, and provides a more than interesting alternative to the Online Bible user interface. This, plus the fact that many users are sticking with Windows XP (myself included), makes me feel that a review is fully justified.

If you already have Online Bible installed on your computer, you don’t need to download any modules. Simply choose the Minimal Install Package and you are good to go. Otherwise, download the English Starter Package, which will only require 14.4 MB of hard disk space on your computer. This package includes the KJV tagged with Strong’s numbers, Strong’s Greek and Hebrew Lexicons, Workman Cross-References and Jamieson, Fausset, and Brown Commentary.

Workman’s Study Bible runs on Windows 98 and higher (up to Windows XP) and does not consume many computer resources, so it should run on any relatively decent PC.

Installation takes only a minute, and the application has a built-in Automatic Update Wizard that checks for new versions of the program on-demand if you have a live Internet connection.

Workman’s user interface is absolutely flexible, since there is no “main window” containing different panes or anything like that. The program can comprise just one or any number of independent windows. These windows can be moved around and resized at will. This means that we can build our own desktop in whatever way suits us. For example, in the screenshot below we can see two windows open alongside a note-taking application (in this particular case, Microsoft OneNote 2007). The window located at the lower left corner is a temporary window (called “hover window”) which has been pinned. 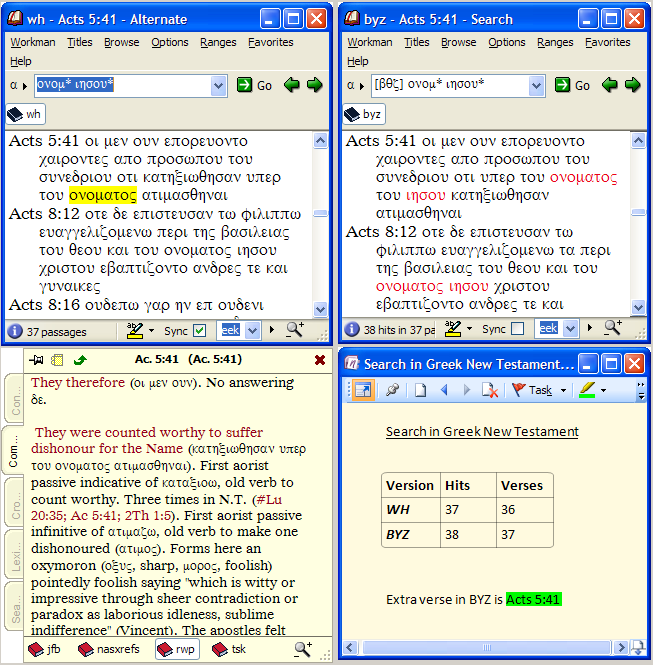 Hover windows can contain any kind of study helps, providing ready access to searches, lexicons, cross-references, commentaries and context. It is very easy to switch from one module to another by clicking on the desired tabs located at the bottom of the window, as well as jumping to a different section via the tabs that appear on the left hand side.

Inside a hover window, every time we click on a Bible reference or a word, a new hover window pops up, and this procedure allows us to follow any train of thought or take our study one step further. Once we are done, the windows disappear by moving our cursor away from them, unless, that is, we want to make them permanent by pinning them (first icon to the left of the window’s title bar) or even converting them into standard windows (second icon).

All of these “free-floating” windows can be grouped and arranged in different desktops, and the program will remember which desktop or group we were using next time it is launched.

Workman’s is a truly feature-rich and highly customizable Bible software application that could be best described as command-line driven. Virtually anything can be done from the Command Line available in the upper area of every window, right below the menu bar. Nevertheless, there are plenty of menu options and context menus for those who are more menu-driven.

Let me give you a very simple example. You can just type ps 51 12 in the Command Line and go to Psalm 51:12, or, if you prefer, you can open the Browse menu and choose the book of Psalms, chapter 51 and verse 12 by means of a very slick and informative series of steps (including previews).

One of the strong points of Workman’s Study Bible is its ability to read most Online Bible (OLB) compatible modules (even unlocked modules). The Find Titles Wizard does a very good job at discovering resources, and we can tell it to import only those we are interested in. 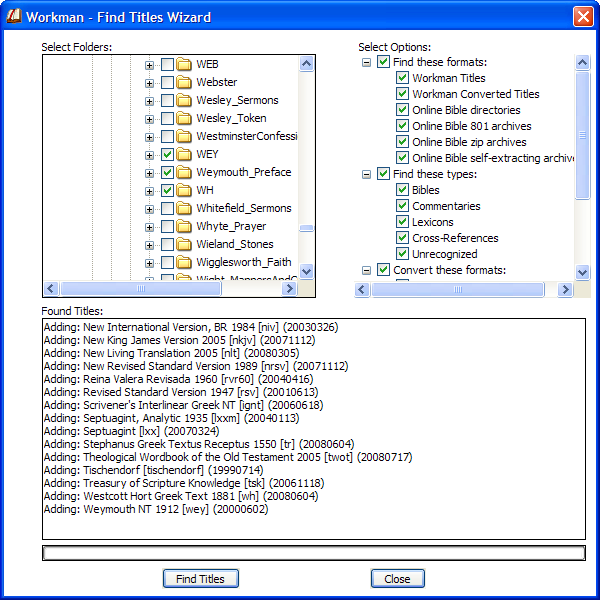 Having an OLB Deluxe code, I could not resist using my modern Bibles within Workman’s. The process took a very short time, and everything went without a hitch.

Whenever possible, though, I recommend using Workman’s own modules (available in the Donwloads page). Once all the modules are installed or imported (converted), we can use the Titles menu to predefine which modules are to appear by default in the different windows. The book icons next to each title name are color-coded according to the category they belong to: black for Bibles, red for commentaries, green for lexicons (dictionaries) and grey for Apocrypha or non-biblical books.

Where Workman’s really excels is in searching. The Command Line is incredibly powerful, and always keeps track of the searches and verse lookups. As a matter of fact, the ability to move around and perform all sorts of actions straight from the Command Line is what sold me in the first place. But as I mentioned previously, don’t worry if you’d rather use menu options and checkboxes instead. You will find clear indications in plain English, so that there will be no need to type any operator unless you want to. 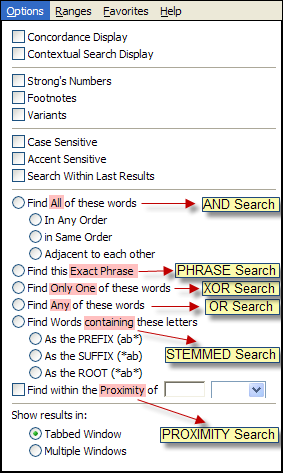 Search results can be viewed in three different layouts, namely, as full verses, as verse in context (displaying the two verses immediately preceding the verse containing the hit and two verses following it)

It really pays off to learn the search syntax used by the Command Line, since the number and usefulness of the options available is quite outstanding (here’s a a quick tutorial on search features). Keep in mind two important things related to searching: a) you shouldn’t display footnotes or variants unless you want them to be searched alongside the Bible text, and b) search operators require spaces, but symbols don’t, and are always evaluated from left to right.

Under the Ranges menu there are a number of predefined search ranges, but it is possible to add customized ones, even if they are non-contiguous, which is really nice.

In the following table you can find a list of the available search commands along with some examples and notes.

** Sentence, phrase and word proximity searches can be constrained to verse divisions by adding a “v” right after the “s,” “p” and “w,” respectively.

*** I had to place a blank space between the opening and closing angle brackets and the range abbreviation so that it would display properly in the table, but the spaces are not needed. Simply write <nt>.

Workman’s includes some other really nice touches, like the ability to highlight text (version specific) and copy any given section of a Bible (with or without formatting) to other programs (e.g., word processors). It also offers complete statistical reports on the reference and word the cursor happens to be on via the Statistics context menu option.

Workman’s Study Bible is a great alternative to OLB’s old-fashioned and unintuitive user interface. It is immensely more powerful and flexible. Its search power is quite amazing, and despite certain stability issues, it is well worth it.