Today I want to briefly review two products that set out to make the original languages of the Bible –and the tools that use them– more accessible to the average person who has little or no familiarity with them. In both cases the goal is to improve our exegetical skills, that is, the way we interpret the Scriptures.

Typically, learning Greek and Hebrew has been accomplished using traditional methods, being exposed to lots of grammar rules and memorizing paradigm after paradigm and vocabulary list after vocabulary list. Today Bible software is here to help. The question is whether this help is going to affect only the mechanics of language learning or have far-reaching consequences in the long run. The other issue is if a democratization of the use of Greek and Hebrew tools is a good thing or not.

These products are particularly suited for people who have never before been exposed to the study of Biblical Greek (or Hebrew), and those who once studied it but now want to refresh what they learned. 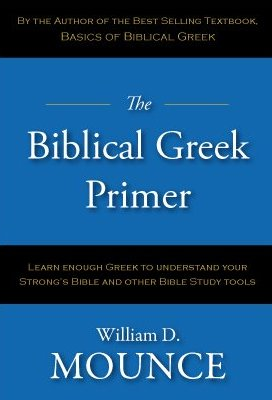 I recommend adding ESV with Strong’s – ESVS (an extra $39.99) at the very least. Other Accordance modules are recommended in the lectures as optional tools.

An even cheaper alternative is to pay $49.00 for a full year of online access to the video series. The streaming videos and screencasts work very well, and a free preview of the first couple of lessons is also available.

This Biblical Greek Primer or “Baby Greek” is, in fact, the first installment of a three-part series (“Church Greek” and “Functional Greek” will follow) that is roughly going to cover the material contained in Bill Mounce’s Greek for the Rest of Us. Having a copy of the book is not required, but it certainly helps.

Every lesson includes a video lecture and a screencast where the principles outlined are illustrated using Accordance Bible Software.

In Accordance, the link between the English and the Greek is done via Strong’s numbers (in Mounce’s case, Goodrick-Kohlenberger numbering system with cross-reference to Strong’s numbers), and some people are very vocal against the use of these numbers, but that is due to their misuse. Properly used (see Dave Moser’s series of blog articles on How NOT To Use Strong’s Concordance, they are extremely useful. Just keep in mind that Strong’s is a concordance, not a dictionary, and should be used basically as an index to find out the appearances of every root word in its context. In this sense, Mounce’s Dictionary and Expository Dictionary are particularly helpful because they hyperlink the number of occurrences of every word under each entry to actual Accordance searches in the Greek New Testament and the English version, respectively.

Cost. For around $250.00 (or less) one can have access to solid teaching and tools.
Flexibility. Different packages available, as well as streaming online video.
Powerful. Mounce resources have some value-added features available only in Accordance.

If it is Hebrew you are interested in, you are out of luck.

Learn to Use Biblical Greek and Hebrew with Logos Bible Software sells for $499.95. This DVD series does not include Logos 4 or any modules. The Original Languages Library is necessary in order to follow the examples shown in the DVDs. It is currently on sale for  $353.56.

Instructors Dr. Michael Heiser (Hebrew) and Johnny Cisneros (Greek) present a series of videos and screencasts that teach how to work with the original languages using the different tools and resources provided by Logos Bible Software.

The DVDs include a browser-like interface and are fully compatible with PC and Mac, although the screencasts always use the PC version of Logos.

In Logos, the reverse interlinears are what link the English to the original languages. Time and time again we are encouraged to create our own lexicons based on a study of the occurrences of the different lemmas, which are always accessible via the English text. This bypasses the traditional lexicon look-up and focuses on a comprehensive study of the search results. The final stage of the process suggested for word studies includes the use of some standard lexicons that define the word under consideration, rather than simply offering different glosses or English equivalents.

The powerful combination of the Reverse Interlinears and Visual Filters make possible the study of the original texts while working with the English Bibles.
Emphasis on avoiding word study fallacies.

Cost. The series is far too expensive, considering the fact that all the modules have to be bought separately.
No streaming option offered.
Greek and Hebrew are bundled together, which means that it is not possible to get only Greek or only Hebrew.

Both courses follow a very similar approach to word studies, and offer helpful tips on how to use the particular brand of Bible software they use. However, in my opinion, Mounce’s series has the edge if you are interested in Greek only.

I would also like to address the issue of expectations. Marketing language falls very easily into hype, and that can develop all sorts of unrealistic expectations. In my opinion, The Biblical Greek Primer is more down-to-earth and restraint in what it claims to do. On the other hand, Learn to Use Biblical Greek and Hebrew with Logos should drastically revise their promotional videos (for an earlier criticism, see D. Miller’s blog). Personally, I consider the assertion “after completing these videos with comprehension you’ll be at the level of a third year Hebrew or Greek student who was trained by traditional methods. All without memorizing anything” to be quite an overstatement, to say the least.

I have taken Greek and Hebrew at degree level (as well as taught a Greek class for lay people at church) and I can assure you that some degree of memorization and quite a bit of hard work are essential. After all, you do have to memorize the Greek or Hebrew alphabet and some pronunciation just to be able to read! Add to that a good number of grammatical terms. Talking of which, in my experience the first single most important problem people face when they try to learn the biblical languages is their poor grasp of English grammar!

Regarding the two questions I raised at the beginning, I do believe Bible software will change the way we approach language learning, but will not supersede what we have known until now. As to the dangers and consequences of knowing “a little Greek or Hebrew”, I have a confession to make. I have sat through some painful sermons lately. I mean, no exposition of the Scriptures. Topical messages loosely backed up with proof texts taken out of context for the most part, motivational speeches, personal experiences and whatnot. Getting acquainted with the biblical languages and the basic pitfalls inherent to shoddy exegesis surely cannot make matters any worse.

I welcome the effort to show how to make use of the powerful tools available in Bible software, and can only hope that it will reverse the current trend to belittle the usefulness of getting to know as much Greek and Hebrew as possible.

Disclaimer: Just for the record, I have NOT received any gratis copy of the products reviewed here.