The new version of Logos Bible Software is being launched today. LBS 4 sports a completely redesigned User Interface, based on Microsoft’s Windows Presentation Foundation (WPF). This allows for a more modern, slicker look and much greater flexibility in handling windows, menus, etc.

Overall, LBS 4 is more visually appealing than its predecessor and makes heavy use of charts, photographs, maps and infographics. If we add to this the new text-to-speech feature we are in for a pretty good multimedia experience. 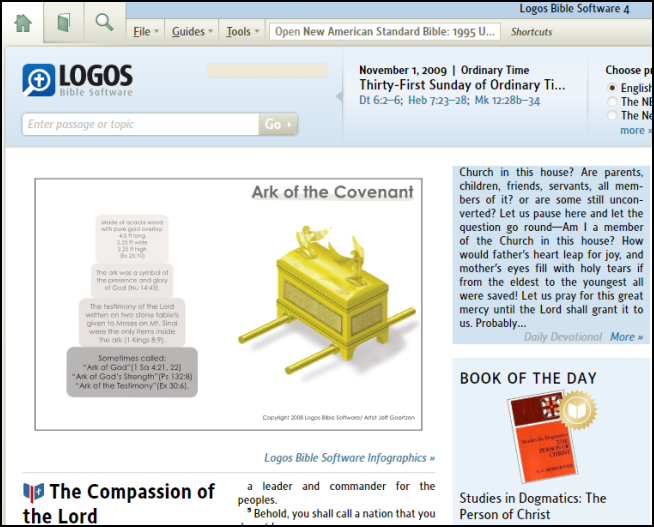 The Home page now looks like an online newspaper, with plenty of links to both local and online resources for further study, but the familiar Go button, where one enters a biblical passage or a topic, is still there as an easy, no-frills launchpad for beginners.

Version 4 comes with some nice library management improvements. These are a welcome addition amidst the increasing number of titles included in most library packages today. Worthy of mention in this area are the ability to add custom tags to resources, an easier, automated way to create collections of books and an enhanced annotation system (including clippings).

The new Reading mode (F11) turns the computer into a book reader (full screen), whereas the Drawing mode (F8) lets presenters draw lines, shapes and so on while projecting to a larger audience.

Apart from the more obvious changes, LBS 4 now indexes all the resources, which results in a dramatic speed boost when performing searches, and allows users to have more control over reports.

Other features worth noting are the fact that map sites include links to Google Maps and Wikipedia, and that  selecting any word or group of words on morphologically tagged Bibles (or Bibles with interlinears) highlights the corresponding term(s) in the other open resources. This feature, called Sympathetic highlighting (a cross-language highlighting of sorts) is shown in the figure below. 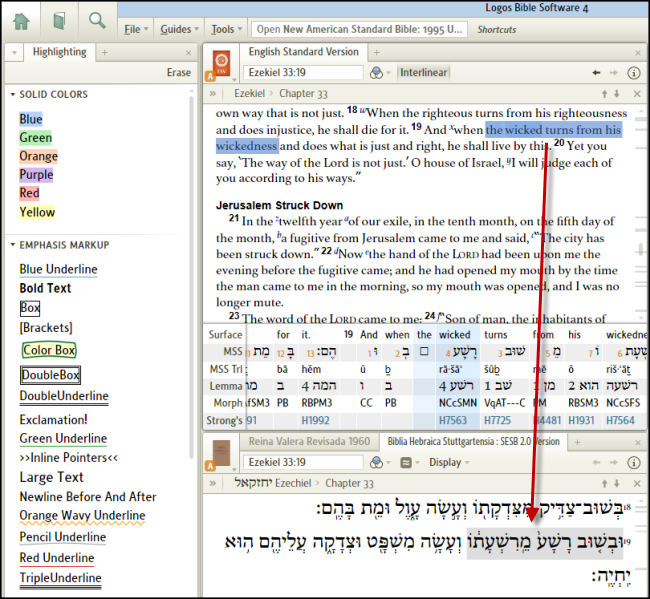 However, not all the changes are necessarily for the better. Personally, I don’t like the new implementation of the reverse interlinears (displayed above), but hopefully Logos will offer the possibility to keep the older v. 3 format alongside the new one in a later release. Similarly, as someone used to typing Greek and Hebrew, I am not enthused with the new input system for writing  the biblical languages (introducing the prefix “g:” or “h:”, the program automatically displays a drop-down menu with all the Greek or Hebrew words, respectively), but I take it as a concession to the majority of user who might find pressing the F2 key and typing away something not particularly easy to do.

Here is a brief list of what we may expect in the near future, as well as the features that have been dropped.

At any rate, LBS 4 and Libronix DLS 3 can live happily together. Furthermore, they can be run concurrently on the same computer, which should make the transition easier for everyone, except, perhaps, for Logos

So, the release of Logos Bible Software 4 is a clear sign that the company wants to focus on improved  Bible study aids (e.g., the new handouts or the Bible Explorer tool) in the context of a more flexible, adaptive and productive user interface. In due course, LBS 4 will be available on three different platforms: PC, Mac and iPhone (in this case as a sort of extension of the desktop version. See here for more details).

Finally, check out the (many) new resources and configurations available, including upgrade discounts for existing customers.